Perhaps you have seen posts warning of the missing verses in the New International Version (NIV) or the English Standard Version (ESV) of the New Testaments. One such post looks like this: 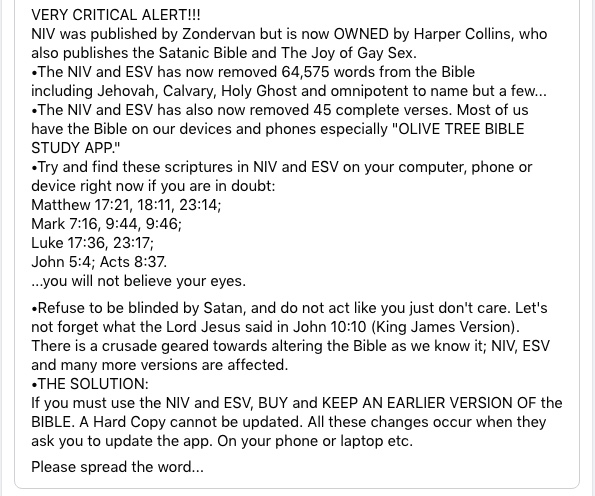 Sounds fairly ominous, don’t you think? However, notice these telltale signs that whoever composed this did not know what they were doing. At the end of the piece, one is warned to get earlier versions of the NIV and ESV. Only thing, an earlier version of either of these translations will not get your missing verses back because they essentially depend on the same ancient Greek manuscripts (MSS). The reader is further warned to keep a hard copy because a digital version like one might find in the a Bible app, like the OliveTree Bible Study app, might be changed on you. I do find it odd that the author of this slander chose only one app–there are so many good ones to choose from.

64,575 words have been removed! Really? I’d like to see that list. These words, so the warning screams, include Jehovah, Calvary, Holy Ghost, and omnipotent. Let’s test this point.

Jehovah only occurs in the KJV 4 times (Exod 6:3; Ps 83:18; Isa 12:2; 26:4) and 3 other times Jehovah is part of place names (Jehovahjireh, Gen22:14; Jehovahnissi, Exod 17:5; and Jehovahshalom, Judges 6:24). I expected a lot more. Jehovah is an ugly transliteration of the divine name of God in Hebrew (YHWH; יהוה). No one know exactly how it was pronounced but the Jews—so as not to use the Lord’s name in vain—always replaced it with the Hebrew word adonai meaning “lord or sir.” Jehovah is the result of blending the consonants of the divine name with the vowels of adonai. Scholars of Hebrew suggest that Yahweh is closer to the original pronunciation but many use YHWH when writing the name. Nonetheless, the KJV regularly translates the divine name as LORD–all capital letters so readers can see when the name of God is used in the original Hebrew. In modern English translations, one will find LORD as the translation of God’s divine name. So no words lost here.

Next. Calvary. The Greek in Luke 23:33 is Κρανίον (Kranion) or “skull.” The Latin is “Calvariae” and means — wait for it— “skull.” And now you know where English translators got “Calvary.”

The KJV used the word omnipotent of God in only one place, and that is, Rev 19:6. The NIV translated the word here as “Almighty,” as in “Lord God Almighty” which is a good translation of the word παντοκράτωρ which means “all-mighty.” Nothing amiss here, either.

Ok, nothing to see here, folks. No missing words among these examples.

But what about those missing verses? Imagine with me. What if the reverse were true and that the older version, such as the KJV of 1611, included “added” verses and words?

For the Son of man is come to save that which was lost.

A similar text occurs in Luke 19:10 and there is no doubt that it belongs here since all MSS have it.

For the Son of Man came to seek and to save the lost.

So if there were some clandestine plan to remove Matt 18:11, why would translators leave in Luke 19:10? The answer is that what we have labeled Matt 18:11 (remember verse numbers were added later) was not originally in the Gospel of Matthew. Later scribes added it because they knew the text from Luke. How do I know this?

The oldest manuscripts that we have that do not have these words at Matt 18:11 are the 4th century Codex Sinaiticus and the 4th century Codex Vaticanus. While the evidence is much more complicated than these four examples, it is enough to show that scholars must decide, when the text is different, which one is more likely original. Important to note here again is that the KJV translator did not have access to these earlier MSS . Thus, newer translations are now based on our oldest and more reliable MSS and the verses that are declared “missing” were not there in the first place. This is true of all of the supposed “missing” verses.

So, in the end, it is still true that Jesus came to seek and save the lost, but among the lost is not any of the verses mentioned here.